Binoculars are an amazing tool that give us an insight into life that is otherwise hidden from view. They manipulate light in such a clever way that we thought we it deserved an article all to itself. Today, we explain how binoculars actually work. 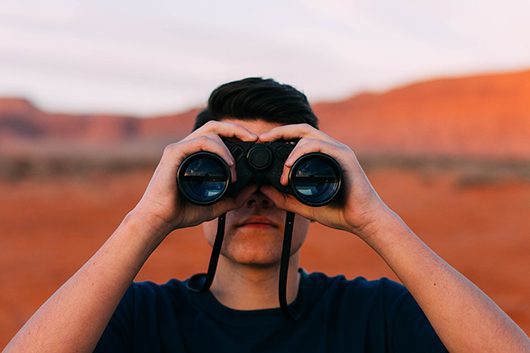 What is the best way to capture your favorite moments by observing something at a distance? Binoculars are the best thing that can happen to anyone who wants to stare at the moon, spot a shooting star, or watch their favorite birds. They place you right on stage as the actions and events you are interested in unfold.

With a device like this, you don’t have to move a muscle or strain your eyesight. But not everyone knows how such an instrument can take you to the objects, actions, and events you desire to experience. So, how do binoculars work?

The Structure of a Binocular

A common misconception is that a binocular is just a more portable version of a telescope.

But, that’s not exactly true.

While a telescope gives a magnified image too, it’s not in 3-dimensions like the image from binoculars can be. With binoculars we view two images from slightly different viewpoints. This is due to the spacing between our eyes. This means each eye sees the image from a slightly different angle and distance. These images are merged together to give us a depth of field. This is only really obvious to us in images we view that are close enough to us, as with increasing distance, the differences between the two images becomes less. 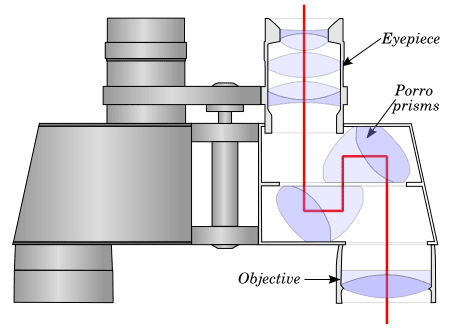 Lenses can be either convex or concave in shape. 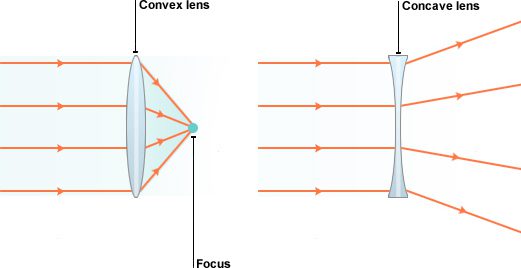 Binoculars use two convex lenses in series (for each eye). The objective lens gathers the light and focuses it together.

The eyepiece then takes this light and magnifies it into the sharp image that we see. Well, almost….

When light rays travels from far away distances and are then focused using a convex lens, they can over-focus and cross over. This has the effect of turning the image upside down.

To prevent this from happening, binocular use prisms.

A prism is a solid piece of glass that acts as a mirror, except that it doesn’t have a mirror’s reflective backing. When a prism catches rays of light at a surface angle that is too great, it simply reflects back as a normal mirror would, instead of internally reflecting the rays of light collected.

Binoculars use two prisms that flip the image 180 degrees so that it is no longer upside down when it reaches your eyes.

The first prism rotates the image 90 degrees before passing it to the next prism which flips it another 90 degrees. This makes a full 180 degree turn which is the same as turning something upside down. So the prisms take an upside down image and correct it for us to see.

The prisms in binoculars can be arranged in different ways but they are usually at 90 degrees to each other. These are called Porro Prisms.

Good binoculars are usually pretty heavy due to the weight of these prisms. 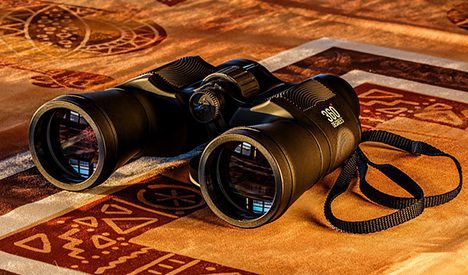 The objective lens collects light from the object you are looking at and brings the collected light into focus.

The prism corrects the image orientation (which is upside down) created by the objective lens. A prism is also known as a corrective element and it is positioned between the objective lens and the eyepiece lens. The prisms rotate the images 180 degrees.

The eyepiece lens creates a clear, visible, and magnified image.

Recommended Article: See which binoculars we recommend for young children in our new guide.

To understand how a binocular works, you need to know that a binocular is developed in two styles and that even though binoculars have been around for a while, the designs are continually modified and improved upon.

The two styles are: the roof prism and the porro prism styles.

Roof prisms are used in small and light binoculars. This is a powerful style of binoculars. When less light is sent from the objective lens to the eyepiece lens, a decrease, in contrast, is observed. The roof prism divides the ray or beam of light into two and brings it back together again. This process results in phase shifting. When the oculars are closer, the image is steadier in a roof prism style of binocular. When it is arranged back-to-back, it is known as roof prisms.

Porro prism binoculars are larger compared to roof prism binoculars. This allows a steadier image as there is a larger hinge between the oculars that gives it a wider range for adjusting the lenses. Some of the major criticisms of the Porro prism binocular are that they have less powerful lenses and have distance issues, but the arrangement works just fine.

Check out the image below to see how the porro prisms work together in a binocular set-up to “flip” the view. 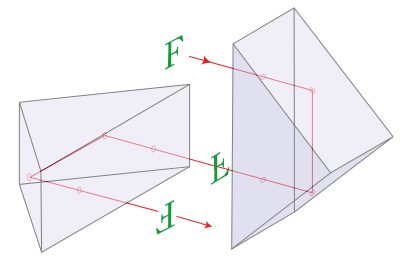 Porro prism binoculars line the objective lens up with the eyepiece lens at right angles to each other thereby erecting and reversing the image produced from folding the light path as collected by the objective lens. When the image is arranged at 90 degrees, it is a Porro prism. For easy comprehension, one of the two prisms moves the picture 90 degrees by flipping it onto one side while the second prism rotates another 90 degrees by flipping it onto its side again. The two prisms essentially turn the image upside down.

All binoculars have magnification numbers which represent how much light has been gathered by the binoculars. An example of such numbers is 8 × 42.

So what do the numbers on binoculars mean?

The magnification number is indicated by the first number, while the diameter of the objective lens in millimeters is represented by the second number.

The magnification specifications describe the manner in which the object is viewed by the binocular. It describes the terrain or object you want to view. They also identify the binoculars. These numbers can also be known as ‘mag specs.’ It is more important to have specific mag specs for specific areas and objects.

The first number in these specifications will show you how many times the size of the object is being multiplied in your lenses so that the number ‘8’ means the object will appear eight times closer to you than it is. It is easier to hold an image steady with a binocular that has lower mag specs. The second number, on the other hand, is the physical diameter of each of your lenses, and it is measured in millimeters.

A binocular is an airtight object that possesses oculars, different types of lenses. The binocular should be kept secure; if it is dropped and the airtight seal is broken, the interior of the oculars will collect moisture and be unusable due to the foggy state the of the ocular. Nowadays, binoculars have oculars that are filled with nitrogen to keep the oculars clear and prolong the lifespan of the instrument.

That’s a wrap for another article at Stealthy Ninjas. Check back soon as we’ve got lots more coming over the next few weeks and months!

Check out our awesome guide to choosing the perfect spotting scope. It’s the top resource like it on the internet.

The 5 Top Binoculars for Kids

The History of Binoculars

How to Clean Binoculars