In today’s guide we explain 12 monocular cues that contribute to our depth perception and sense of distance. 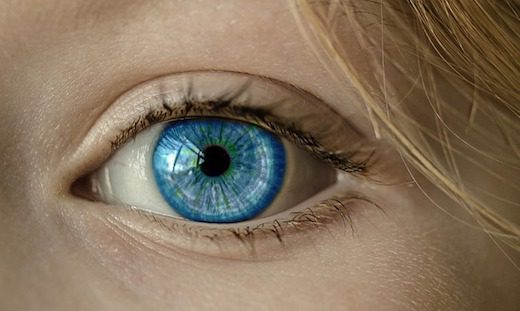 By definition, monocular vision is to view something with one eye. Be it through a device such as a long distance monocular or telescope, or having lost the ability to use an eye.

In this article we take a look at the various ways in which our brain perceives depth, size, and perspective when presented with visual information from just one eye.

This article accompanies our recent guide to monoculars.

It’s certainly a lot easier for our brains to accurately calculate depth and distances when using two eyes. Binocular cues are based upon the different images that two separate eyes produce. They each see something from a slightly different angle, which makes computing things like depth and distance much easier.

That’s not to say we can’t do it with the information presented from just one eye. However, we have to do it using different “tricks” which sometimes aren’t quite as reliable.

Motion parallax describes the way in which stationary objects appear to move at different speeds against a background when the observer is moving.

Imagine driving in a car and looking out of the passenger window. The objects near to you pass through your field of vision very quickly but those far away take much longer. These differences are depth perception cues. We base an objects distance on how quickly it “moves” through our field of view.

This video illustrates the idea brilliantly. Start from the one minute mark to get straight to the relevant part.

Motion parallax is common in the animal-world with animals that have poor binocular vision. Birds that move their heads from side to side are creating the motion needed to use the depth perception cue.

Our ability to use the relative sizes of objects to gauge distances develops very early on in life. By knowing how big objects are in relation to each other we can easily judge how far away they are from each other and also us. That doesn’t mean to say we have to know how big they are in the first place (see absolute size).

However, this cue can be distorted, as illustrated below in the Ebbinghaus illusion. 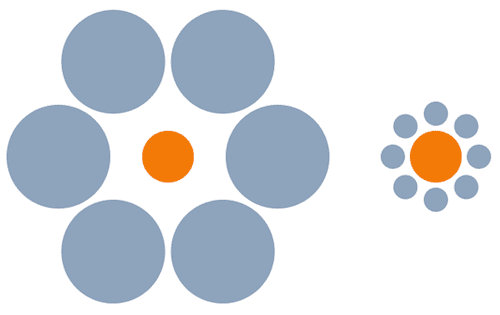 The two colored central circles are equal in size but the circle on the right appears larger due to the distorting influence of the surrounding circles.

When we know actual size of an object, it’s quite easy for use to gauge our distance from it. Our familiarity with objects allows us to determine how far away they are. For example, when seeing a mountain or hill near your home you can judge how far away you are from it just by how large or small it appears, as you are so familiar with it. Upon visiting a place for the first time you don’t have this luxury.

Sometimes we just don’t know the size of an object and we can’t compare it to another. In this case, we assume a smaller object is at a greater distance than a large object at the same location.

As an object moves closer to an observer, its apparent size increases. This gives us the cue that the object is in fact moving and also allows us to judge its distance from us. As something like a car approaches you in the road, we use this cue to gauge how far it is away from us.

Texture gradient refers to the amount of detail we can see on an object. When an object is close to us we are able to see textures and details more easily. When we are far from an object we can’t see the little intricacies of texture.

Looking at the grass on a hill while close up, we can see the individual blades and how they move in the wind. The farther away we are the less of this visual information is available to us.

Think of this a bit like the resolution of a digital image. When close to an object we get the high resolution picture that is full of detail (texture). When far from it we get the low resolution version which lacks clarity and definition.

Our brain uses the lack of visual detail as a cue to determine that we are far from the object in question. The relative clarity of one object compared to another is also a good indicator.

Natural effects like heat haze, water vapor, fog, dust and sand can all affect our clarity of vision. Usually these have more of a negative affect from a long distance. Think of the haze when it’s hot. This usually affects things towards the horizon. Objects that are close to us certainly aren’t affected.

Our ciliary muscles are used to change the shape of the eye lens so that we can focus on objects at varying distances. Accomodation refers to the amount of work that are eye muscles have to do to focus on an object.

When we look at objects up close, our muscles contract. For far off objects our muscles stretch the lens to bring the object into focus. Our brain uses this kinaesthetic information (proprioception) to judge depth and distance.

This describes when an object partially overlaps or obscures part of another. If an object blocks part of another then we know that it is closer to us. However, this doesn’t really help to gauge the actual distance from us, it just helps us to put the distances of objects in order or ranking. We would use other monocular vision cues to help with this.

Objects that are large distances away form less of a contrast with their background. This makes it much harder to gauge a distance between the two and to the viewer.

If you’ve got any questions about anything we’ve covered in today’s post them be sure to ask in the comments section down below.

To be notified of any new posts like this here at StealthyNinjas.com then make sure to follow us on Facebook. There are links in the right-hand sidebar.